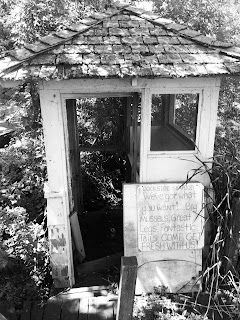 ‘Oh sweetheart. You don’t need decorum; you’ll be wanting dirt under your fingernails. Because in dirt and tree root integuments under fingernails and just a whiff of fetid stuff, now that is a better place to look. Yes. Dirt is more beautiful than decorum.’

It’s all about noticing. People. All our rich peculiarity. Landscape - for it seems to me that landscape has immense mood and character; natural landscape I mean. This is something I am writing about in a new book of magical realism (gone weirder). And, as a kid, I used to find this of intense comfort because my immediate family was so radically dysfunctional but no one else knew. Or saw. Or chose to see. We survive. So, I developed a habit of always seeing things - the noticing, especially at their weirder edges maybe - and talking to trees. Anyway, now wherever I go, I drink in that landscape, whether it be the smell of baked earth after the monsoon rain (God, it’s potent and that’s why it is made into an attar) or Welsh mud.

And I love a swamp. Its dark mud and enticing fringes. There’s something simultaneously gorgeous and repellent about one and I do love a paradox. I hadn’t met many swamps until I married someone from the Deep South and went Southern Gothic. The night I met him, he read such to me while rocking me in hammock and that, reader, is why I had a shotgun wedding with him and got into swamps. 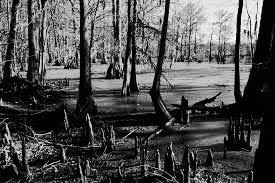 And here we see a combination of factors.

The swamp. A rich and filthy place. Full of so much scary and entertaining life, a lot of which you cannot see. And the swamp looks like it could reach down, down, punching magma on the nose and fighting its way into the earth and making a swampy core. To me. I have a hot imagination. The swamp is beautiful.

Love. It is pure and free, and it is not conditional on someone being like you. It does not wager; it accommodates and bends.

Oddity. Being weird. Cursing. A language that you have adapted to make your own in the face of dull words and dull being proper, proud neurotypicality and other limiting factors.

Manners. No, not the manners which make kindness, but the manners that live with an inherent rigidity which prevent you from trying new things or associating with new people because they are not ‘nice’ or ‘becoming’ or ‘suitable’. You see I have a bit of an axe to grind here. Oh, I do, I do. There are certain types of courtesy and good breeding which are murderous at worst and at best unkind; there are lives, impressing their brilliant manners on others, that subjugate and crush when instead those manners, like the love, could bend and accommodate and curse with generosity. There is a meanness, a cruelty, which is hard to deal with because it refuses to self-reflect and which is dressed up in a pretty silk and gentle-hued refinements. Here, to me, is the place of annihilation (to borrow a phrase from Angela Carter). Not a pub fight, rough-house or solitude on a tough and stormy night, but in the place of charm and good grace which would kill you rather than get its fingertips greasy from a chicken bone or that lump of Turkish delight which your own loved one, after they had rocked you in the hammock and read Southern Gothic to you, had slid into your mouth.

There we have the ingredients for ‘Terminal Teatime’. You’ve got me, with my weird eye - maybe I am ‘Betty’ a little bit, even; you’ve got nature with its abundant and demonstrable personality and it’s a whole lot bigger and more incredible than we are; you’ve got oddity - those fools who shun and other: how dare they? You’ve got the bigots, all trollied up in politeness, who would shame the eldritch child who only wants love and only wants to give the same; finally, you have the pretty manners and refinements which are judgemental and cruel. In the story, we see those who are custodians of a swamp, but they might have been of any other place, a place of deep magic or not. (Aren’t all places magic, though?) We see a landscape that is rich in its own detailed beauty and there is a cautionary tale (I might have hammered it home a bit hard) but most of all there is a celebration of the triumph of ‘dirt’ over ‘decorum’, as ‘a shimmer of a wave passed over the water and the efflorescence of old roots’ and, here, weird fiction celebrates, through its own muddy satire, those true things, justice, love and beauty.

Anna Vaught is an English teacher, tutor and mentor for young people. She’s also a novelist, poet, short fiction writer, copy writer, editor and mental health campaigner and advocate. Her new novel, Saving Lucia, is out with Bluemoose in April and her first short story collection, Famished, will be published by Influx next September. There are a lot of other books and projects in the pipeline and Anna is represented by Kate Johnson of Mackenzie Wolf, NYC.