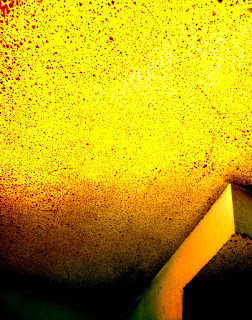 ‘From the trig point on Ditching Heights, the town was a grey eye open in yellow fields. Beyond its outer suburbs, across the barren countryside, the ancient outlines had again risen. Sunken rooms, burial chambers, mineshafts and underground galleries, long-gone walls and fortifications stood out like the letters of a lost alphabet. The tombs at Rixall glowed under the dead grass near the abandoned railway station. It was here that we’d seen Carter Thatch hazed in drifting dust and orange daylight.’

So begins 'Hardrada', a story of things that flicker in and out of life as hot summer weather drags on and intensifies. Restless England, hazy and baked mad, writhes with ghosts and re-enactments. Men assembled at a trig point agree to share their intelligence with George Nunes, landlord of The Swan with Two Necks and small-town villain in his dotage. Carter Thatch, a man Nunes banished during the long hot summer of 1976, is back, sighted at an abandoned railway station on the edge of town.

So begins the walk of George Nunes shrouded in dust, punished by heat, off to deliver on a death-threat he’d issued in 1976. I started writing 'Hardrada' on 12 September 2018 after completing the first draft of a novel. I finished it on 5 October. The idea had first rippled through me sometime in 2017. Since then, it had preyed on me while I was writing the longer story. The idea shuddered and shunted into life in stages. I rarely see a story whole. Who does? A few ideas need to connect and coagulate, even in a relatively short, compact story like 'Hardrada'.

Hardrada? That name again. Why is the story called 'Hardrada'? When I shared the story with some of my students, this was often the question (and a source of bemusement or even annoyance).

Harold Hardrada was the King of Norway from 1046 to 1066. A Viking with a storied career, who had fought all over the known world, according to his saga he was ‘the greatest hero under heaven’. Anyone who knows anything about our national story in the year 1066, the year we were smashed by off-shore asset strippers called the Normans, Harold Hardrada tried to get in first, invading the north of England to enforce his thinnish claim only to be beaten by the other king Harold—Harold Godwinson—at an epic encounter at Stamford Bridge, near York, mere days before William the Bastard landed on the south coast.

The year 1066: its plot curve, its beats, reversals of fortune and moments of critical choice, action and inaction, move and counter-move and its array of unforgettable characters—Edith Swan-Neck, Edward the Confessor, The Conqueror—contains every storytelling element, or at least every element in a story with a sobering, downbeat ending, a story of failure, a horror story. It could well be that everything I’ve ever written—comic or horrific, realist or surreal—has the same plot as the year 1066: The trap closes; I lose, we lose. Harold Godwinson: heroic war leader, ambitious, formidable, lost and got himself killed. Harald Hardrada: ageing hard man, ambitious, formidable, lost and got himself killed, too. How did the latter end up appended to a story about George Nunes, aged publican and small-time crook?

I have more ideas than I’ll ever have time to realise as stories. Some of them are stray, idle, without an obvious point or prospects but I record them in my notebook anyway. The novel I was writing before (and drafted after) 'Hardrada' contains some material about Vikings. Vikings in the ninth century encounter some strange person or entity in northern Russia that they bring back with them and bury under a wood in East Anglia. Inspired in part by a line in an M.R. James story, I later found that this made-up story of mine has some basis in truth. In Philip Parker’s The Northmen’s Fury I discovered that ‘A king named Sveigdir became obsessed with the idea that the aesir, the principle Norse gods, originally lived on Earth in a homeland far to the east of Scandinavia, and he set off in search of them.’(1) King Sveigdir ends up being taken by a dwarf into a cave that closes behind him (a real warning to the curious). In my version, he comes back out and this time has someone with him, someone he buries under a wood in East Anglia.

Anyway, all this got me brooding on Vikings and how when I was eleven and twelve I’d been obsessed with Dark Age history, the world of the Vikings and the Anglo-Saxons, had knowledge of their stories and culture (like the noir thriller-like, tunnel-at-the-end-of-the-night plot of the year 1066) that I could apply in reworked versions or modern reimaginings. I could return or unearth figures and personalities from the Dark Ages as we enter what can feel like a new dark age: Ivar the Boneless, Eric the Red, Tostig, Hardrada. The first conception of George Nunes is here, but rather than thinking about an eerie story, a literary horror story, I was thinking about a realist one in which an old hard man, possibly a publican or at least someone who sits about in pubs a lot, is talked into sticking up for younger, weaker relatives, induced out of retirement, essentially, and in trial by combat gets himself killed. In my Shakespearean-Tolkienesque version of the Dark Ages, the old warhorse Hardrada is talked into the 1066 adventure by the worm-tonged exile, Earl Tostig. This is how a working title for the story arrived and then, really, only as a notebook heading under which I could tag any emergent ideas and thoughts.

In the beginning, then, I was imagining a hybrid of Raymond Carver’s Elephant and Get Carter. That obviously sounds like the best story anyone could ever write. I determined not to write it that way when the world outside threw up some strange images of its own.

The summer of 2018 was long and hot. Riding around on my bike that summer, in the countryside, the yellowed land, through parks where the sun had killed the grass I’m sure gave me the idea of a red, Mars-like landscape, a glimpse of the ‘orange daylight’ with which 'Hardrada' begins. Long gone structures began to appear in the English landscape. Neolithic earthworks, burial sites, medieval farms and ruins rose to the surface. It was as if an old England was showing itself, maybe even coming back to us, or worse, coming back for us. My partner mentioned to me that a story in The Guardian(2) about the reappearance of the monuments reminded her of the story I was writing, the novel that involved in its background the semi-made-up Viking legend. This suggestion of a landscape into which old structures emerge soon started to draw into it the Hardrada figure I’d toyed with earlier and in doing so stripped away any vestiges of Raymond Carver’s Elephant vs Get Carter. Then elements of time, timescale and time-slip struck me when I read David Southwell’s introduction to Paul Watson’s The Book of England’s Dark Dreaming: ‘When the country becomes drought pale, the ghost lines appear. Iron Age villages. Lost hill figures. The land as a book whose invisible ink is revealed. The withering trauma of heat bringing revelation, exposing a map of connective tissue to the past. The soil giving up its stories. A rising mystery through place. That summer was the summer of my sixth year. It is my summer now.’(3)

The phenomenon of the rising monuments had happened before, most notably in the legendary long hot summer of 1976. Like David Southwell, I was six in 1976. I remember the heat wave of that year only dimly. My toy plastic sabre-toothed tiger melted and there was a huge electric storm that ended the summer like storms end summers in stories. Connecting 2018 to 1976 gave me the idea of return, of something repeating itself, maybe even a loop: a loop in time or a loop in the memory of the stricken and elderly. This is how I came by the idea of criminal George investigating the crimes of Carter Thatch while disorientated by heat and other things. Chasing Carter Thatch became the line of the story, or the lumbering of the story, as however powerful George still is, he’s not so swift and nimble as once he was. And George may well be haunted. Or he may be suffering from dementia, his mind and memory addled. He could be something else entirely.

In my initial notes, when I sketched out all the ideas I’d had for a story called 'Hardrada', George Nunes was called George Gadd. I changed this because it reminded me of Gary Glitter. Carter Thatch was called Bender, which I changed because of the robot in Futurama and Judd Nelson’s character in The Breakfast Club. Another character was originally called Lola Stone but she became Nola Stone because a Lola Stone appears in the 2009 film The Loved Ones. The title 'Hardrada' was about the only name I didn’t change. It might seem obscure or oblique, but the story seemed to lose something when I toyed with alternatives. In any case, embracing the obscure and the oblique was allowing my stories to naturally drift into eerie terrain and open up imaginative spaces and new possibilities for me and my writing.

We are all George Nunes. One day they will come back for us. They are all just beneath the surface, twitching, waking and whispering our name.

Footnotes:
(1) Philip Parker (2014), The Northmen’s Fury, Vintage, p.19
(2) Maev Kennedy, '"Millennia of human activity": heatwave reveals lost UK archaeological sites', The Guardian, 15/8/2019
(3) David Southwell (2018), The Book of England’s Dark Dreaming: A Series of Drawings on the Subject of The Matter of England and The World Turned Upside Down by Paul Watson, The Lazarus Corporation, p.5

Ashley Stokes is the author of The Syllabus of Errors (Unthank Books) and his short stories have appeared in The Lonely Crowd, Bare Fiction, The Warwick Review, London Magazine and many others. He is the editor of Unthology, Unveiled and The End: Fifteen Endings to Fifteen Paintings. He lives in Norwich and is currently writing a novel.