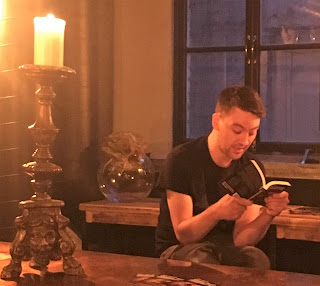 PLEASE NOTE THE NEW VENUE FOR THIS EVENT - MORE DETAILS BELOW.

The Shadow Booth returns to London for the launch of Volume 3!

We'll be celebrating the launch of The Shadow Booth: Vol. 3 on Thursday 11 April, with an evening of readings, conversation, and maybe a drink or two! This is a FREE event, but space is limited so please RSVP at the end of this page to let us know that you're coming.

Reading on the night will be:

ROBERT SHEARMAN - author of five short story collections, which between them they have won the World Fantasy Award, the Shirley Jackson Award, the Edge Hill Readers Prize, and three British Fantasy Awards. But he is probably best known for his work on Doctor Who, bringing back the Daleks for the BAFTA-winning first series in an episode nominated for a Hugo Award. His story 'I Say (I Say, I Say)' appears in Vol. 3.

TIM MAJOR - whose novel about spontaneous clones, Snakeskins, will be published by Titan Books in spring 2019. Tim’s short stories have been published in Interzone, Not One of Us and numerous anthologies, including Best of British SF 2017 and Best Horror of the Year #10. His story 'Hangers-On' appears in Vol. 3.

Readings will start at 7.00pm, so please make sure you're at the venue in plenty of time.
The event will take place in the Function Room at the North by Northwest, a Hitchcock-themed pub in the Islington/Hackney area.

We have a limit on numbers, so PLEASE, if you're coming along, make sure you mark that you're attending on our Facebook event page. We won't turn anyone away, but we need to let the venue know rough numbers.

See you all in the North by Northwest!