Enter the Shadow Booth... in Chester 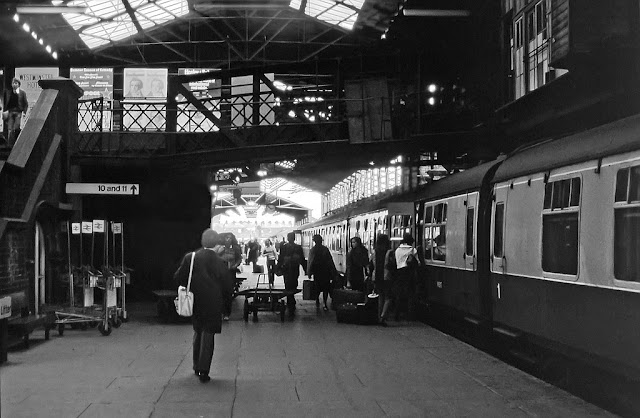 On 19 October, The Shadow Booth made a rare appearance in the physical realm. Manifesting at FantasyCon 2018 - the convention of the British Fantasy Society - rumours abounded of its presence in and around the city of Chester. What happened that day may or may not have looked something like this...

Before he even stepped off the train, Phil was dreading the weekend. There was a reason why he'd spent the last ten years avoiding Sandra, Curtis, Ranesh and the others, and with each mile that the train had trundled out of London that reason had become starker and starker.

Brushing crumbs from his belly, Phil reached up to gather his bag and his jacket from the parcel shelf. He was a mess, and he knew it. While the others had become fitter, happier - richer - as the years passed, he had grown fat and confused. He felt something had passed him by, but he couldn't say exactly what.

Stepping out onto the platform at Chester, he wrinkled his nose. What was that? Cowshit? He'd barely set foot outside London in almost a decade, and the chemical taint of car fumes was noticeably absent.

It was as the train pulled away that he realised he'd left his suit bag on the shelf. 'Bugger, bugger,' he muttered to himself as he puffed along behind the line of departing passengers, falling further and further behind. He'd have to find a Moss Bros in town, and hope they kept his size. Curtis had always been laidback but he'd never met the bride-to-be. Turning up at the wedding in jeans and a faded Red Dwarf T-shirt would only make him more conspicuous than he already felt.

It was as he stopped to catch his breath that he saw it. The canvas booth was propped against one of the riveted iron beams that supported the station roof. The fabric was weathered and stained a reddish-brown in places, but it was the hand-painted sign that caught his eye.

'Enter the Shadow Booth,' it said, 'and you will never be the same again.'

Phil glanced around. The platform had cleared now, and he was surprised to find himself alone. His eye drifted to a sign on the other side of the tracks - 'London - 179 miles' - and then back to the booth. Its promise seemed too good to be true. He wanted nothing more than to no longer be himself.

Placing his bag on the platform, Phil reached out a hand and parted the canvas. Without thinking twice, he stepped into the darkness.

The guard found the bag ten minutes later. It had been placed with care next to a pillar, but there was nobody nearby. Having checked for a tag, she considered calling it in - but the last thing they needed was a full evacuation. A tentative tug on the zip revealed a packet of Kettle chips and several changes of man's underwear. Panic over, then.

She glanced briefly at the faded patch on the tarmac nearby, as if something large had once stood there. That didn't make any sense, though, so she pushed it from her mind.

(This short piece was originally read at the Shadow Booth live event at FantasyCon, 19 October 2018. Several members of the audience have since been reported missing.)