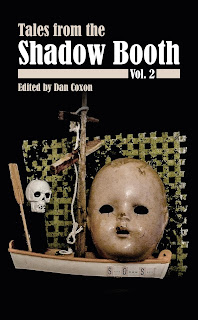 The booth juts at an angle from the sand, the canvas taut beneath the weight of the drifting dunes. Janet almost passes it by. But it’s the sign that snags her attention. Painted in rust-red onto three pieces of driftwood, the sun-bleached planks lashed together with lengths of twisted blond twine, it looks surprisingly fresh. Enter the Shadow Booth, it says, and you will never be the same again.


The Shadow Booth, a journal of weird and eerie fiction, returns for Volume 2! Drawing its inspiration from the likes of Thomas Ligotti and Robert Aickman, The Shadow Booth explores that dark, murky hinterland between mainstream horror and literary fiction.

Enter the Shadow Booth, and you will never be the same again…