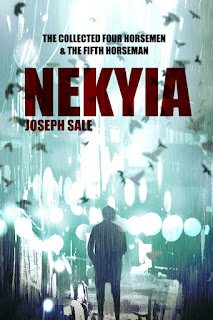 Not long left to run on our crowdfunding campaign. If you haven't done so already, be sure to order your copy of Shadow Booth: Vol. 1 (ebook is now available too, and all paperback orders include an ebook option free of charge).

In the meantime, here's our latest Author Spotlight, on Joseph Sale. His story 'City of the Nightwatchers' appears in Volume 1.

Joseph Sale is a novelist, writing coach, editor, graphic designer, artist, critic and gamer. His first novel, The Darkest Touch, was published by Dark Hall Press in 2014. Since, he has authored Seven Dark Stars, Across the Bitter Sea, Orifice, The Meaning of the Dark, Nekyia and more. Under the pseudonym Alan Robson (his grandfather's name), he won third place in Storgy's Exit Earth anthology competition, judged by Diane Cook.

He is the creator of †3 Dark, a unique publishing project born in 2017 showcasing the work of 13 writers including Richard Thomas and Moira Katson; each story is accompanied by original concept art from Shawn Langley and with cover art by Grand Failure.

He contributes feature-pieces, film, TV and book reviews, and fiction to Storgy Magazine. He also writes for GameSpew, and has an enduring love of videogames.

His short fiction has appeared in Silver Blade, Fiction Vortex, Nonbinary Review, Edgar Allan Poet and Storgy Magazine. His stories have also appeared in anthologies such as Dark Hall Press's Technological Horror and Storgy's Exit Earth. In 2014 he was nominated for the Sundress Award for Literary Excellence. In 2017 he was nominated for The Guardian's 'Not The Booker' Prize.

You can read a short interview with Joseph Sale on the Gehenna & Hinnom website, here.

Remember to order your copy of Shadow Booth: Vol. 1 via our Kickstarter page!