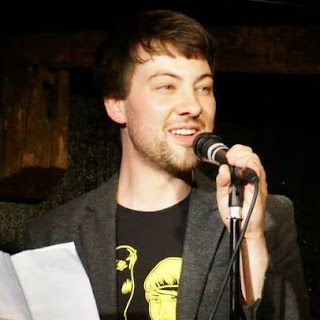 Continuing our series shining the spotlight on the writers who have stories in Volume 1 of The Shadow Booth, today it's the turn of Daniel Carpenter.

Daniel was one of the founders of award-winning live literature organisation Bad Language, and is the current producer and host of The Paperchain Podcast, a monthly show in which writers and artists perform new work based on previous guests' prompts. The Paperchain Podcast is now in its second series, and was longlisted in the Saboteur Awards. You may have heard him mention us in the latest episode! His writing has been published widely by Metazen, Unsung Stories and The Irish Literary Review, amongst others. Daniel's non-fiction has been published by Tor.com, and he is a film critic for STORGY.

His story 'Flotsam' appears in Volume 1 of The Shadow Booth.

You can find out more by following him on Twitter, or by following The Paperchain Podcast. And remember to order your copy of The Shadow Booth on Kickstarter.